This book is the sequel to the one I reviewed on Monday, but as usual, I’ve done my best to avoid spoilers while not being overly vague. By definition, a sequel is going to give away certain elements of what happened at the end of book one, but I hope not enough to ruin that if you haven’t read it yet! 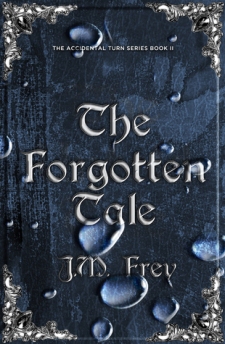 The Forgotten Tale brings with it all the self-awareness of the first installment, pointing out the problematic tropes of fantasy fiction by subverting or just outright criticising them. Pip’s rants are like Book Twitter distilled into character form — every angry reader who wants to see themselves better represented, everyone who has ever finished a book and been disappointed. She walks straight into the middle of a story and demands better from it. Demands that it doesn’t silence its only black character. Demands that its mothers have their own stories.

But Forsyth has also grown into his role as a social justice warrior, and while he’s not always as forthright as his wife, he still has a particular tenacity when it comes to wanting his world to be better. I especially liked his determination not to give into toxic masculinity, and to allow his nephew to express his feelings; I think that’s something that deserves more screentime in fantasy and so on.

Frey does a masterful job of balancing an ensemble cast. It helps that this is a sequel so there are fewer new characters to try and keep track of, but nevertheless, the characters are all distinct and developed, each with their various idiosyncrasies. I have a soft spot for Wyndham, though it’s hard to tell how much that’s just because he’s the closest to me in age. The book also prominently featured Alis, Forsyth and Pip’s daughter, who is not yet a toddler — and while it doesn’t overlook the difficulties of carting a baby around, she manages to be somewhat engaging even for a reader like me (I’m not wild about babies). Then again, they don’t smell or make loud noises through the pages of a book, so that would probably explain it.

In many ways the feminist elements of this book are subtler than the first one, or perhaps I was just expecting them this time. They’re not presented in such solid chunks of ranting, but are more about plot and smaller bits of dialogue. What does take centre stage is the notion of reading, and the power of interpretation and belief — faith that a hero beats a villain in the end. The characters are aware of themselves as featuring in a sequel, and they respond accordingly, yet where this might have seemed contrived it somehow worked.

It’s difficult not to draw a few comparisons with Inkheart again, especially with Elgar trying to find the right words to fix things like Fenoglio frantically patching up his own world. This is a more adult story, and it’s taking a different approach to the idea of being inside a fictional world, but I feel like people who grew up loving Inkheart because they wanted to be able to go into their favourite books might well enjoy this one.

Some of the time I felt that the book was a little long — like the first one, it’s a pretty sizeable tome, although I don’t know the page count. And part of that was because of the dramatic irony of knowing far more than the characters, so not having the same sense of tension about trying to find out the truth. That said, when the end came I still found myself sad that it was over (even though it was 2:36am and I definitely should have gone to bed and finished it in the morning. I MAKE POOR LIFE CHOICES). I think I’m mostly just not used to reading longer fiction these days because I tend to opt for quick reads.

Anyway, I would hazard that I enjoyed this more than the first: I knew what to expect, and it also played more closely to my tastes (plus, very little explicit sex). If you’re into self-aware fantasy that isn’t afraid to dig into the issues of the genre, this could be a series for you.