Okay, time for a confession: I wasn’t wild about Everything, Everything, Yoon’s debut novel. You may actually remember that, because I’m pretty sure I reviewed it here. *disappears into the archive* Yup. Here. It was one of my fairly early ARC reviews. So why did I request this one from NetGalley?

Two reasons. The first is that I’d heard a lot about it and I’m a conformist sucker, so I like to be able to join in conversations about popular books. The second is that it has a gorgeous cover. Like, a seriously gorgeous cover. I mean, come on. 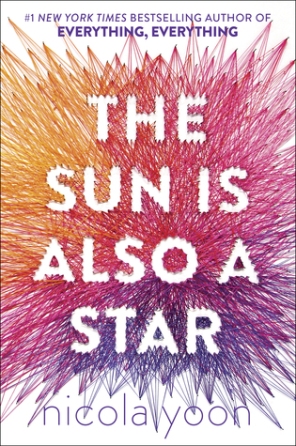 So despite being a little bit dubious due to my mixed feelings before, I requested this and gave it a go.

Almost immediately, I ran into a major problem: I do not like romance. And this is a romance. To summarise very quickly, it’s about a boy and a girl who meet due to a series of coincidences. They spend one day together, fall in love, and then separate for several decades because one of them got deported. That’s all they get. One day. One day of falling in love. Kissing. Expressing their deep and meaningful feelings. Being straight.

I mean, it’s a diverse enough story, don’t get me wrong. Neither of the main characters are white, and their immigrant families are a big part of their lives and stories — particularly Natasha, who is featuring imminent deportation. That definitely made it more interesting by adding a layer of dpeth and complexity and ramping up the tension and urgency of what was happening.

As romances go, I guess it was reasonably cute. While it may have been a one-day insta-love type of deal, it came across as more gradual than that in the story, and it was based on a lot more than looks. It was about poetry and science and interests and bravery and all that stuff that makes romance vaguely engaging, you know? Periodically, I caught myself thinking that some bits were cute. I’m pretty sure I even laughed here and there.

At the same time, this is me we’re talking about. A romance has to be something phenomenal to win me over, especially when it’s (a) straight and (b) the main plot of a book. This has plenty happening in the background, such as the family issues and fate issues and future issues and immigration issues, but the main plot, the bit that uses up the space and emotions on the page, is a romance.

Yeah, I probably should have seen that one coming. This one’s on me, guys.

One of these days, I swear I’ll figure out why everyone seems to think kissing is such a big deal. In the mean time, I’ll mention a handful of elements about the book that I could relate to, or at least understand slightly more than the romantic element. There’s a fair bit of stuff about living up to familial expectations, and while I don’t have the kind of parents who pushed me to go to a high-flying uni and study medicine, I know plenty of people who do.

(My mum’s a careers’ advisor; she’s seen way too many students being pushed to study medicine or law when they don’t want to / aren’t good at the right subjects, and I think that’s probably why she was so supportive when I announced I wanted to do a weird subject like ASNaC.)

And I do notice coincidences and things like that: they were a big feature of the book. Honestly, as books with a romance focus go, it really was fairly enjoyable. It’s just not my type of book in the first place. Which makes it entirely my fault that I felt a bit apathetic towards it. I should have realised and not requested it in the first place. My bad.

So if you’re into romance and the like, you might enjoy this a lot. It’s well-written and like I said, even cute in places. If you’re not, come and hang out with me and we can discuss Deep and Meaningful Friendships instead.